During my baby shower yesterday (yep, I’m expecting baby number two in August), a good friend and I started talking about where we had previously lived several years ago.

Together with three other friends, who were all either in college or barely trying to make ends meet in our newborn professions, we shared an old rowhouse near the iconic neighborhood of Capitol Hill in Washington, DC.

That’s right about where the glamor associated with that house starts and stops. And you’ll soon understand why.

I occupied a section of the basement for $100 a month. My friends had actual rooms and they didn’t pay more than $250 or so. If you know what the real estate market bears in a place like DC, especially when a property is located within walking distance to the building where our nation’s laws are passed, then you know that that rent is a steal.

Our house was situated between five other rowhouses. And it was the one in most disrepair. In fact, I heard that another house one door down from ours was featured on an episode of HGTV.

Its owners were part of what was considered gentrification or revitalization efforts at the time, a trend that was starting to really ramp up in several of the district’s run-down or long-forgotten neighborhoods.

Back to where we lived…  We knew we had a rodent problem, but we would soon find out just how bad the situation was. We often heard mice skittering within the walls and we spotted droppings every once in a while. Clearly, it was something we could handle. But looking back, I don’t see how we managed to live there for so long without totally freaking out and packing up.

The last straw for me was the day I caught sight of the shadow of a mouse inside the refrigerator, and watched it scurry away. And when one of my friends found a once unopened pack of food in the cupboard that had been chewed threw and partially eaten. Ew.

As my friend and I reminisced about this yesterday, her face frowned and she didn’t want to even think about it. But I couldn’t help but laugh.

Within seconds of reflecting on that time of our lives, I thought about how far I’d come. Instead of scraping dollars to pay the $100 rent, I now have enough to put thousands of dollars toward a mortgage.

Instead of storing food in a fridge that was prone to mice visits, I now have stainless steel appliances.   Instead of sleeping on a hand-me-down futon bed in a section of a basement, I now have a master bedroom and I rest my head every night on a California king bed.

My life today is far from posh, but it’s certainly drastically different from what it looked like years ago. 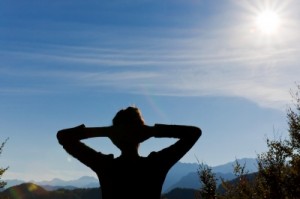 It’s amazing what happens when you keep moving forward in life, when you set goals for yourself, and when you don’t allow life’s setbacks to derail you from achieving your dreams.

When you’re constantly moving ahead, you’ll hit some bumps in the road. That’s inevitable, as life was never meant to be easy or predictable. Where’s the fun in that?

At the end of the day, as you look back (and make sure you do every once in a while), you’ll realize joy comes not from reaching your destination, but in the journey itself.

Having accomplished all that you’ve set out to do, it’s the moments when you thought you were defeated that will bring a smile to your face and gratitude in your heart.

For those of you who are in the midst of those moments right now: Trust me, you’ll get there.

How have you paid your dues, either in the past or now? Feel free to share.