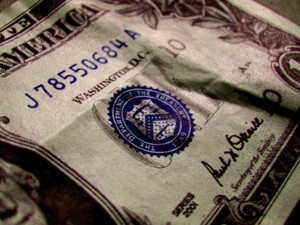 I may have been about 10 or 12 years old when I wrote my first check.

My dad would call me into the kitchen. I would walk across our hard linoleum floor, pull out the stool from underneath the peninsula-shaped kitchen island, and plop down next to my dad as he laid onto the countertop the checkbook, a pen, and the monthly bills.

“Write this check for me, baby,” he would say. He would then direct me, telling me what to write on each line.

At that age, writing checks seemed like such a responsible thing to do. I felt so grown up and proud of myself. My dad would even go as far as let me practice signing his name in cursive. And you know what? I got pretty good at it.

I can’t remember if my dad ever clearly explained why he tasked me to fill out the checks when the monthly bills arrived in the mail. Knowing him, it was probably just to teach me a lesson in responsibility. Who knows?   But the other day — when I was signing my own checks to pay this month’s credit card, cellphone, cable and daycare bills — I figured it out.

Ah ha! I thought to myself. “I HATE paying bills,” I said to my husband, but more to myself. “Now I see why my dad let me write out the checks when I was old enough to do it.” Essentially, he probably hated the act too so he used me as a way to avoid the feeling of giving away his hard-earned money, I thought. (Probably not. But we’ll see what runs through my mind when my daughter is old enough to fill out checks.)

Paying monthly bills is such a difficult task sometimes, isn’t it? I mean, you work hard all month and then here come those pesky letters in the mail requesting more money. You think: Didn’t I just pay that bill?!

I guess it’s one of those “necessary evils.”  After all, it is something we have to do like clock work if we want to enjoy things like — oh, I don’t know — heat, air conditioning, water, electricity, a roof over our head, as well as television and high-speed Internet.

And depending on what you consider is required to live a comfortable or reasonable lifestyle, your bill-paying might even include other expenses like a monthly car note, that new Android cell phone, school loans, private school tuition for your child, an entertainment allowance, etc.

No matter how you look at it, though, it all adds up to Expenses. Liabilities. Consumption. Debt. Investments. Output. Responsibility. Spending habits. Overhead. Upkeep … Pick your synonym.

On a positive note

But you could look at it another way — in a not so negative light– and that’s what I started to do that day. Paying bills every month is also a matter of Choice.

Lord knows there are hundreds of thousands of people out there who have decided not to make that choice. Either they are on one extreme, where they have racked up the debt and have given up, making a decision to file for bankruptcy and start over on a clean financial slate.

Or, they are on the other side of the spectrum and falls into the category of living a more simpler lifestyle without modern-day amenities. Like the Amish, for example. And very poor people, of course, don’t even have a choice in the matter; they are relegated to the bare-bones basics, if that.

Most people in developing countries, I would argue, fall right around the middle. Some call this group the middle class. Whatever you want to call it that would probably be me.

I enjoy, what some may consider, “nice” things. Nothing crazy and outrageous. Dinner at a restaurant, for example, a (very) mini shopping spree once a year, getting my hair and nails done on special occasions. You know. Stuff like that. Thankfully, I don’t crave “luxury” or material things so much that I would compromise me and my family’s financial integrity. I like to think of myself as pretty frugal, actually.

Anyway, back to my lament about the bill-paying…

You know, I was pretty upset that day when I sat down and started to write those checks. (And I don’t get upset easily. I had a moment of frustration and I took it out on the checks.)

That’s when I started to think about that time spent with my dad, and how that was such a fond memory that involved signing checks.

I also started to think about how nations, communities, and, indeed, families around the world are still trying to regain balance from economic turmoil, and may not be able to afford the same privileges even if they are “basic necessities.”

Yeah. I don’t mind paying bills every month.  It’s more than just a means to an end. It is an opportunity — that a lot of folks don’t have.   That kind of financial sacrifice, if you even want to call it that, provides the type of living conditions that I find comfy, like a well-worn t-shirt.

You bet   I’m thankful that my family is in a position to pay these types of bills given there are so many families and individuals that are struggling nowadays to make-do on a shoe string budget.

And that’s where my mind drifted as I was writing out those checks. I started mad, but ended up glad.

Because of that, next month and thereafter, when I’m sitting at the kitchen table, signing the checks, licking the back of the envelopes, sealing them and then dropping them off at the post office, I’ll remind myself to put this stuff all in perspective.

Not only that, I will make a concerted effort to refrain from saying negative phrases like, “I hate paying bills.”

I’ll remember the hard-working people who are laid off, the downtrodden, and the sick who would do anything to put pen to paper and send off the check to keep the lights on, but who can’t.

Instead of complaining, I’ll be a lot more grateful. And you know what? I’ll think about that proud feeling I got when I was a kid signing my dad’s name at the kitchen table. Except now, it’s my name that I endorse and the bills are addressed to me.

What’s your perspective on the matter?