I recently had the privilege to interview Dee Dee Myers, the first female White House press secretary. She’s currently on tour to promote her latest endeavor as the empowerment ambassador for a new Jones New York women’s empowerment campaign. This is a woman who believes that you can do anything, and her passion for helping other women (and men) is evident in how she describes the role of women in the 21st Century workplace today. 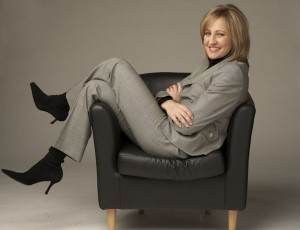 Part of the “Empowering Your Confidence” movement depicts where women have been and where they are headed, as they increase their impact on business, education and the community.

The initiative includes free access to the Little Black Book of Career Advice, an online collection of inspirational quotes from over 100 high-profile women like Ivanka Trump, Gwen Ifill, Bobbi Brown, Donna Brazille, and Deborah Norville, to name a few. What’s more, if you’re in need of some startup funds to start a business or other endeavor, consider applying for the 2011 JNY Empowerment Fund. Click here for details on that.
. . .

Myers has helped lead the search for successful women to contribute advice that will help others meet the challenges that we all seem to face at some point in our careers — no matter where you are on the career ladder.

In our interview, you’ll hear her recant some of the issues she faced while serving as press secretary. In such a visual role, you can imagine the type of scrutiny she might’ve encountered. But being a woman had its unique challenges, she said. From the clothes she wore, to the style of her hair, it seemed that nothing was off limits (or even the slightest bit unprofessional and petty.)

Indeed, becoming the first in your class, in your industry, or line of work takes guts. Success requires a sense of security in who you are and a determination to keep going even when circumstances or people try to sideline you.

All this talk about standing out from the crowd reminds me of a story:

A 6th grade teacher had just given her class an assignment, and instructs each student to partner with another student in the class to complete the in-class exercise. Several minutes in, the teacher looked up from her desk and noticed one girl working independently.

She asked the girl, “Why are you working by yourself after I told you to pair with a classmate?”

The girl replied, “Because I wanted to do the work alone.”

“But aren’t two heads better than one?” asked the teacher, thinking she had made her point.

The girl quipped, “Not if the other head doesn’t know what they’re doing.”

I was that girl. Very independent, and insubordinate, apparently.

That day, though, I learned something very special and it’s stayed with me all these years. It’s this: Others may try to squish you into a box. But don’t be afraid to stand up and out, voice your opinion, squirm a little, be uncomfortable with being comfortable, but be humble.

My teacher and I had a good chuckle that day. In the end, though, I think both of us understood that this was a lesson in taking chances and  taking actions that are authentically you — even if it means getting in trouble for the moment or at the risk of attracting funny looks from your peers.

One of Jones New York’s slogans for its empowerment campaign is: “We love strong women with something to say.” Dee Dee Myers certainly serves as a great example of this, as she comes across as someone who isn’t afraid to speak her mind but that is sensitive to every man and every woman’s journey.

Check out the video below to hear more of our conversation and what she has to say about a mother’s worth in the workplace, her passion to help other women, and other thoughts that are found in her book Why Women Should Rule the World.

Dee Dee Myers served as White House Press Secretary for the first two years of the Clinton administration, from January 20, 1993 to December 22, 1994.  She is the first woman to serve as White House Press Secretary, as well as the second-youngest person to do so.  After leaving the White House, Myers was a frequent political commentator on cable and television networks and an original consultant to the prizewinning NBC series, The West Wing.  She is currently a contributing editor to Vanity Fair, an analyst for CBS News, a popular lecturer on politics, the media and women’s issues and author of the New York Times best-selling book, Why Women Should Rule the World.

Emily Brown is the key contributor and creator of TheCareerPioneer.com, a blog that delivers articles and posts about job industry trends; plus motivational, retrospective stories about career exploration and discovering one’s passion. She is a journalist and serves on the board of the Alliance for Women in Media, National Capital Area Chapter.

Her work has appeared in Bloomberg News, The Wall Street Journal, The New York Times, The Los Angeles Times, and others. Emily lives and works in Washington, DC. She can be reached at info@thecareerpioneer.com. Feel free to drop her a line to say “hello,” seek advice, suggest an opportunity or story idea, or provide news of your own.

Emily is one of 70 finalists for the Power 30 Under 30 Awards in Washington, DC. The program honors 30 outstanding individuals under the age of 30 around the United States that have achieved extraordinary success. Young leaders are recognized from the in several categories, including the Arts, Entertainment, & Media; Business; Community Service; and Politics. We’ll be sure to keep you posted as the final 30 honorees will be announced on October 21.