Are you a movie buff? Or are you a sucker for a good action film or chick flick? My favorite types of movies are those based on real-life events. And although I realize Hollywood fictionalizes some aspect of the true story to enhance the film, I always get chills during the part of the movie when the protagonist experiences sudden revelation or insight. 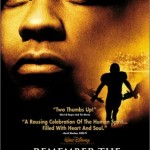 One of my favorite scenes that serves as an example of this, is in the movie Remember The Titans. In case you haven’t seen it, Titans (Walt Disney Pictures) is an American sports drama, based on the true story of a newly appointed African-American coach (played by the incredible Denzel Washington) and his high school football team on their first season as a racially integrated unit.

Click Here to Watch the film clip and then please read on.

If you’ve watched the film, you know that eventually the football-playing characters acting in this particular scene rise to become two of the movie’s leading “good guys,” championing the cause for racial integration, teamwork, and brotherly love.   But as this particular scene suggests, the “captain” or leader wasn’t setting a good example for his peers to follow.As a result, his teammates — both black and white — displayed poor behavior and lacked support for one another.

As his face had indicated, the captain experienced sudden revelation, finally opening his eyes to the impact his poor attitude (or lack of a good spirit) was having on the success of the team.

What does your attitude suggest to others?

How would  you describe your attitude today?

As the movie so poignantly alluded to, your attitude does influence the actions and emotions of others — whether you realize it or not. It can either either breed similar feelings among the people you spend time with, or it will repel and drive individuals away from you.

When I was younger, and my older brothers can vouch for this, I had a terrible attitude. I oftentimes moped, never seemed to be satisfied, and felt depressingly insecure. (Don’t ask my why I endured those types of emotions. There’s not time right now to indulge in sob stories.)

Anyway, when I experienced this type of attitude my brothers didn’t want me as company. Not because they didn’t love me, but because my crummy attitude was spoiling their fun.

As I grew older, I gradually began to understand the effects of my poor attitude. And thankfully, as an adult, I’ve gained greater control and more confidence in who I am so that I no longer resort to the state of mind that leads to a negative attitude as described when I was a kid.

Is it time for a change in your attitude?

Hopefully, you too have matured over the years, and no longer resort to a similar child-like condition. Wouldn’t you agree that poor attitudes is also a reflection of immaturity?

The key to overcoming poor attitudes is to first acknowledge you might have one. And understand that we always slip into those funky moods every once in a while. So it’s important to constantly keep our minds, emotions, and attitudes in check.  Poor attitudes could be the achilles heel to our success.

It could be hindering us from achieving our dream and career goals, and stopping us from getting ahead.  No one wants to be around a sour sport. And professionals definitely don’t want to partner with a pessimistic or negative character.

Remember that your attitude can be contagious. Let’s commit to more positive, engaging and uplifting attitudes whether we’re at work, in the home, or out-and-about.

You never know who might be watching or listening!

What attitude have you noticed surfacing lately? Have you pin-pointed the root cause? Eradicated the source of discontent leading up to your poor attitude?

Or do you continue to wallow in your emotions instead of immediately working towards a resolution and overcoming the momentary negativity? If you’ve beaten the ‘tude or you’re still working through your distasteful mood, please share your story with the rest of us!