If you could speak to your 30-year-old self with the knowledge you have today, what would you say?

That was the question that led Joyce Roche to write a deeply personal memoir entitled, The Empress Has No Clothes: Conquering Self-Doubt to Embrace Success (BK Business)

What would she have told her younger self? That she had earned her spot and deserved success, she says. 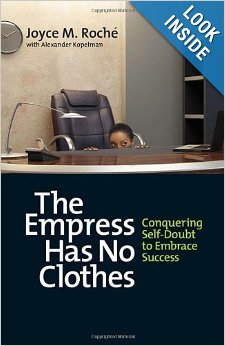 Back then — as a young professional moving up the corporate ladder, oftentimes in predominantly male environments or as one of a handful of people of color — Roche constantly felt like an outsider.   In fact, she felt like a fraud.

“I wasn’t enjoying the journey,” she said in a phone interview with The Career Pioneer.

As she explains, there was a little voice in the back of her head constantly nipping away at her self-esteem as she moved up in her career. And no matter how successful she’d become, it was ever-present.

However, she noticed something. That voice usually reared its ugly head when she moved into a new role, one that required increased responsibility or a different skillset, she explains.

It would say she’d “stumble this time.” Or “they’re going to find out that you’re not as smart as we thought.” Or that “she couldn’t cut it,” she says.

That insecurity led her to work “crazy hours” and over-prepare for everything, she adds.

The letter that struck a cord with everyone

When a letter she wrote, detailing what she later discovers is the Impostor Syndrome, appeared in O Magazine, she received tons of letters and emails from other professionals who shared her story.

That’s when she knew she had to write the book — to help the new generation of workers.

In it, not only does she tell her own story in memoir format, but she shares details from interviews with several other prominent business leaders who had experienced similar feelings as they ascended up the ranks.

As conducted research for the book, she found there are three common “triggers” to the Impostor Syndrome: Race, economic status and gender.

What exactly is the Impostor Syndrome?

The phenomena was first coined in 1978 by researchers, Dr. Pauline Clance and Dr. Suzanne Imes as the “imposter phenomena” after studying 150 highly successful women. Despite their success, these women had held the belief that they were inadequate for the job, and feared they would eventually be found out.

Ms. Roche described the imposter syndrome as fear and self-doubt that causes you to question your abilities, even in the face of success.

Those who are struck with the syndrome constantly feel the need to prove themselves to others or internally validate that they deserve to be where their are.

Outwardly, you may appear confident and composed, but on the inside you’re facing “gripping fear,” she says.   People who have it typically work long hours, are considered a workaholic, and tend to over prepare for tasks.

In some cases, such people end up compromising their personal life, becoming singularly focused on accomplishing something that it overshadows other parts of their life, she says.

A fear of failure and concerns about fitting in is also characteristic of the Impostor Syndrome.

“What’s happening internally is that you’re comparing yourself to a new group of people you’re engaged with,” Ms. Roche says.

Can you overcome the Imposter Syndrome?

Although it never disappears entirely, no matter how successful you become, there is a way to “quiet the voices,” Ms. Roche says.

Number one: Face the fear.

For her, that means writing down what she’s feeling and thinking, being as honest about those thoughts as possible. Then, it’s a matter of looking at what you’ve written to clearly see how irrational it sounds.

Some people overcome by talking to a trusted friend or personal coach, and explaining their negative thoughts and feelings, she says.

Number two: Get a reality check and gather objective evidence to prove to yourself that you can do the job.

If you’re moving into a new role or taking on a new project, for instance, look at the people around you. By the evidence of their life and experience and that of your own, what would suggest that you are well-suited for the role?

Consider your accomplishments, your college degree, or experience and use that as evidence to validate yourself, she says.

If you find yourself getting sucked into comparing yourself to other people, remember that nobody’s perfect.

They consider themselves just as flawed as you.

“Look at them through a human lens,” says Ms. Roche.

“When someone compliments you, don’t do the knee jerk reaction” and belittle what you’ve done by saying things like, it wasn’t a big deal or by deferring to someone else’s efforts, she says.

Determine if it is one of the three main triggers — race, economic status or gender.

It might even be the environment in which you work, she says.

If your workplace is one where making even the smallest mistake is a career killer, then you’ll likely feel insecure about taking chances or contributing to the greater good in a way that feels authentic to you, she explains. Similarly, if you feel unsupported on the job those insecure thoughts can easily creep in.

“None of us do well when we don’t feel that we’re really enjoying what we’re doing, or part of creating something or making something happen,” she added.

In those cases, it’s probably best to try and find ways to move yourself to another environment. That may mean applying for a new j 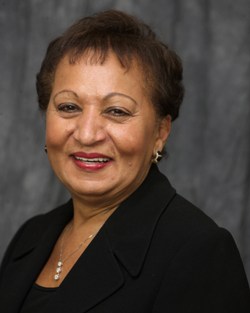 ob at another company or simply moving to another department, she says.

There are three primary messages she wants people to glean after reading her book, The Empress Has No Clothes:

1. You’re not alone.
2. Just because you suffer from bouts of the Impostor Syndrome, it doesn’t mean you won’t be successful. In fact, the Impostor Syndrome usually drives some people to greater achievement because they are constantly pushing to show they can do it, she says.
3. You can learn to quiet the voice and enjoy your success.

You can learn more about Ms. Roche and purchase the book at Amazon.

If you enjoyed this article, don’t forget to LIKE it and go ahead and share it with friends and colleagues. They’ll thank you for it!