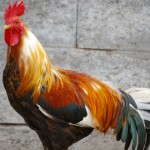 Did you know that chickens populate this earth more than any other type of bird, clocking in at 24 billion in the world as of 2003? It’s no wonder then that so many of us humans resemble the domesticated foul when it comes to cowardliness in our careers and in pursuing our life dreams.

Did you also know that domestic chickens are incapable of long-distance flight? Chickens will sometimes fly to explore their surroundings, but usually do so only to flee perceived danger.

As a high schooler, like a lot of teenagers, I was very shy and insecure. There were so many extracurricular activities that I wanted to participate in, but was too afraid to put my bid in for a spot. I incessantly wondered what others thought about the way that I looked or acted. (How petty!) And I was crippled by the fact that I’d be compared to someone else if try-outs were involved.

Why didn’t I just go for it? What was I so afraid of? Why did I consistently run the other way when challenges were facing me head-on? That same fear has plagued me as an adult too. And I’m constantly fighting against my natural inclination to shrink back, rather than claim a victory.

Eleanor Roosevelt once said: “You gain strength, courage, and confidence by every experience in which you really stop to look fear in the face. You must do the thing which you think you cannot do.”

I sure could’ve used this quote back in high school! Even still, this precept certainly carries much weight in my current life as a working professional, wife and mom. Every single day, I make efforts to take calculated risks and make decisions to go out on a limb for my career and to support my family.

By facing both opportunity and the chance for failure, I realize that I am adding to my existing strength and adding to my character, more courage. By facing my fears head-on, I am able to endure challenges with greater confidence.

But enough about me, what about you?

How many times have you shied away from a new opportunity or a great job because you were plagued with doubt and the hesitation that you wouldn’t make the cut?

Are you a chicken when it comes advancing your career?

Are you fearless, brave, venturesome? Or are you the complete opposite: gutless, cowardly, and timid in your career?

Without taking chances, you may never grow professionally. Be certain you take smart risks. Don’t take risks just for the sake of doing someone out of the ordinary.

What risk can you take this week, this month, or this year, to propel your career to the next level and bring you greater satisfaction (and possibly more money)?

Remember that you can’t move forward by standing still. Even if you took what might seem like a step backward, it’s at least movement toward productivity and that could yield a favorable outcome if you combine it with some stick-to-itiveness.

Take heart and release the fear to go after your dreams!