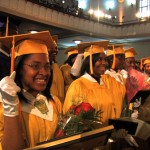 Courtesy of The Providence Effect/ Dinosaurs

Over the weekend, my husband and I went to the movie theater to watch the documentary The Providence Effect.

The movie chronicles the journey of Paul J. Adams III, a black man with activist roots in the 1960’s civil rights movement, whose mission was to turn Providence St. Mel, located on Chicago’s west side, into a “first rank college preparatory school, and its African-American student body into a corps of driven, disciplined, high achieving students.”

It was inspiring to watch the triumphant story of kids who trekked from impoverished, drug-ridden and violent neighborhoods, to a school led by professionals who believed that anything is possible despite one’s bleak circumstances.  Over time, that belief transferred to the students and to their parents, and the school’s track record for success flourished.

For the students who attended Providence St. Mel, getting an elementary and secondary education was just the beginning of their journey to success. According to a study led by researchers at the University of Michigan, for the past 25 years, 100% of the school’s high school graduates are accepted into 4-year universities. Those universities include some of the top educational institutions in the U.S., like the Massachusetts Institute of Technology, better known as MIT, and Northwestern. 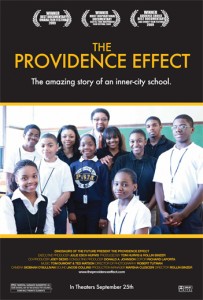 Courtesy of The Providence Effect/ Dinosaurs

What I found most inspiring about the school is its use of a mission statement, which students are required to recite each morning similar to as when most school-age children recite the Pledge of Allegiance to the United States flag.

The mission statement, which can also be found on the school’s website, is:

At Providence St. Mel, we believe. We believe in the creation of inspired lives produced by the miracle of hard work. We are not frightened by the challenges of reality, but believe that we can change our conception of this world and our place within it. So we work, plan, build, and dream – in that order. We believe that one must earn the right to dream. Our talent, discipline, and integrity will be our contribution to a new world. Because we believe that we can take this place, this time, and this people, and make a better place, a better time, and a better people.
With God’s help, we will either find a way or make one.

“One must EARN the right to dream…”

How profound, I thought when I heard those words.

Have you earned the right to dream?

If you answered “yes” to any of those questions, then it’s time to make a change.

Much like the kids of Providence St. Mel, its founder, principal and staff, you must believe. But don’t forget to accompany your belief with action. Be resolute. Unswerving. Follow your dreams.   And even when the odds seem stacked up against you, eradicate the fear. It’s time to stop taking a back seat in life.   And start devoting one hundred percent into your dreams.

It’s not enough to just have faith. Faith must be accompanied with action — in life and especially if you have a strong desire to live your dreams. Accompany your belief with lots of hard work and due diligence, and you’ll soon grow closer to your dreams. I certainly have.

You can learn more about Providence St. Mel and The Providence Effect movie at http://www.providenceeffect.com/

Emily Brown is the key contributor and creator of  TheCareerPioneer.com, a blog that delivers articles and posts about job industry trends; plus motivational, retrospective stories about career exploration and discovering one’s passion. A former business journalist at Bloomberg News, her work has also appeared in  The Wall Street Journal,  The New York Times, The Los Angeles Times, and others. Emily lives and works in Washington, DC. She can easily be reached at info@thecareerpioneer.com. Feel free to drop her a line to say “hello,” seek advice, suggest an opportunity or story idea, or provide news of your own.