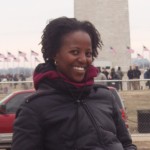 As a young girl growing up in Nairobi, Kenya, Elaine Wacuka Hurt imagined herself one day becoming  either a judge or working in foreign diplomacy. As a 2004 graduate of Georgetown University in Washington, DC and former Peace Corps volunteer, she says she’s now well on her way to fulfilling her dreams of becoming a United Nations diplomat.

Elaine is currently working as a consultant with the U.N.’s peace-building initiative. In the fall, she’ll be attending the School of International Training, or SIT Graduate Institute, in Brattleboro, Vermont, to undergo specialized advanced training for professionals in fields ranging from international education to international development to language teaching.

I chatted with the 28-year-old this afternoon as she waited to board a plane in her Florida hometown. This weekend, she’s flying to Annapolis, MD to reunite with her Peace Corps friends, and to celebrate a colleague’s wedding. She shares with the Career Pioneer readers her personal story, her fears and insecurities, and her hope for the future.

The Career Pioneer: What inspired you to pursue a career as a U.N. diplomat?

Elaine: One thing that really cemented it for me, was the cross-cultural thing. Even from an early age, I wanted to bring people together, and help people accept each other for who they are. Growing up, friends would tell me that I’d one day become a social worker or something like that. They’d say, “You’re just a really happy person, and everyone wants to hang out with you.” Plus, I’ve wanted to become a U.N. diplomat since I was a kid.

The Career Pioneer: You were partially raised in Nairobi, Kenya. That’s where you and your mother are from. How did she, as a single mom, make the decision to move to the U.S.?

Elaine: It was actually on a fluke. Initially we came over to the U.S. just for a vacation, and to visit some of my mom’s friends. Well, she went to an art exhibition with her friends, to help sell artwork, and they made a lot of money. And because she had somewhat hit the (glass) ceiling at her job in Nairobi, she decided it was best to stay in the U.S. So, we didn’t go back. That was 1990. I was 10.

The Career Pioneer: That had to be traumatizing for a 10-year-old!

Elaine: It was! I didn’t really get to say goodbye to my friends or anything. (laughing)

The Career Pioneer: Did your childhood desire to work in foreign services change after living in the U.S.?

Elaine: No. When I went to boarding school that’s when I started really deciding that I wanted to be a diplomat, because I started meeting people from other countries.

The Career Pioneer: I have this perception, and a lot of people who are originally from the U.S. have a similar perception, that if you go to boarding school you’re wealthy or well-off.

The Career Pioneer: I see. So as you were finishing up your studies at boarding school, how did you decide on Georgetown?

Elaine: Well, I had settled on attending the University of Miami with some of my friends. We were going to be close to the beach and it was going to be great. And I had made all these plans to stay in Miami. But then my school counselor, who was a Georgetown alumnus, suggested that I apply to Georgetown’s School of Foreign Service because of my interest in foreign service.

But after visiting their website and learned that they only accepted 400 students in each incoming class, I started to think it wasn’t a possibility. My counselor said that I should still try. I never expected ever getting into that school. I wasn’t even trying to. Even as I was filling out the application, I never thought that I could get accepted.   I looked at the kind of students that went there and read about what they do and I felt that they were on a whole other level. I was looking at it from, not just an academic standpoint, but a socio-economic level as well.

The Career Pioneer: You were riddled with self-doubt, and felt you couldn’t match up.

Elaine: I felt it was going to be too difficult to get in. I think that self-doubt came from my experience at boarding school. It was the first time that I’d seen such privilege. They had all this access to money and information that I didn’t have.

The funny part of the whole Georgetown story was that, after talking to my counselor about my concerns, he recommended that I apply to Georgetown College, instead of the School of Foreign Service. So, I filled out the application and mailed it off. Only afterward, I realized that I had forgotten my plan.

So my admission forms had me down as a School of Foreign Service applicant, instead of for the other school. I thought: “Oh well, it’s done. I won’t get in.” And I just made preparations to go to Miami. Plus, I had already taken some classes at Miami-Dade Community College to get a little edge and so that I wouldn’t have to pay for as much tuition.

The Career Pioneer: Then what happened? Did some time pass and you didn’t hear from Georgetown?

Elaine: Well, my mom was relocating to another Florida city, and I spoke to her by phone one day while I was staying with a friend in Miami. And my mom said a letter had arrived for me. She said, “You got a letter from some school, George-something.” I asked her, “Is it a thick envelope or just a letter?” And she said it was just a letter. I thought that it was definitely a rejection letter, and told her to leave it there and I’ll get it later.

But even when I got home I didn’t open it for weeks. I went back to Miami and my friend had later asked my mom to mail it to her and that she’d open it for me. When the letter arrived, my friend opened the envelope and just started to chuckle. She said: “You got accepted silly!”

The Career Pioneer: That’s a great story! So, what did you end up getting your degree in?

Elaine: I have a Bachelor’s of Science in Foreign Service.

The Career Pioneer: Wow! And to think you thought you weren’t going to match up. After graduating from Georgetown how did you come to the decision to join the Peace Corps?

To really understand development, you need to know what’s happening abroad. In Peace Corps you get an opportunity to apply a lot of things you study and how to tailor what you’ve learned according to what you do. And you learn how to shape policy.

The Career Pioneer: You worked in Education Development for Peace Corps from June 2006 to June 2008. Was what you described your experience? Do you feel you learned all of that?

The Career Pioneer: It had to have been difficult working in a developing country. Where did your volunteering take you?

Elaine: Madagascar mostly. And I traveled to Senegal and South Africa. I taught multiple classes of students life skills, English and health.

The Career Pioneer: What challenges did you experience?

Elaine: Some days were just really, really hard. No electricity. There were cyclones. Long periods of time with no water. You had to travel to get water and siphon it yourself. We were on an island off of an island, so it was definitely challenging even though it was somewhat of a tourist area.

The Career Pioneer: After Peace Corps, you began working as a consultant with the U.N. How’s that been? What are your responsibilities?

Elaine: Working for the United Nations as a consultant, I’ve had to wear a lot of hats. I maintain the Africa section of the website www.peacebuildingportal.org. I manage information regarding the NGOs who run peace-keeping efforts in Africa, make sure the information is up-to-date and vet any new people who may want to join the portal and who are dedicated to peace-building or peace-keeping on the Africa side.

I also create newsletters outlining what Peace Building Portal is trying to achieve. I maintain the website content, along with write letters to CEOs and directors of peace-building organizations.

The Career Pioneer: Have your dreams changed over the years as you continued to gain more experience, learn more, and meet new people?

Elaine: My dreams haven’t changed, but I think I’ve gotten more clarity. When I initially said that I wanted to be a diplomat I thought it was going to be through the United Nations. But now I’m considering the Foreign Services. I’m just trying to figure out the best way to get there and what’s going to be best for me professionally and for my lifestyle.

The Career Pioneer: How do you thing the Peace Corps helped shape you and your perspective?

Elaine: One thing I learned is to never assume you know better. Always be willing to look at something from someone else’s perspective.

The Career Pioneer: For people who are considering applying to become a Peace Corps volunteer and to those who are not, why do you recommend it?

Elaine: I’m a big advocate for understanding other cultures. There’d be a lot less problems in the world if people were educated on other people’s issues. I’d recommend it to anyone. I’m also a big advocate of it because I feel it helps people step out of themselves. It forces you to be selfless.

The Career Pioneer: Thanks so much for sharing your story!

You can also check out Elaine’s blog at http://readysetgomadagascar.blogspot.com. As she puts it, the blog was short-lived, but it should still give you somewhat of a thumbnail sketch of her volunteerism in Madagascar.

Were you inspired by Elaine’s story? Would you like to share your own story or recommend a Career Pioneer to be featured? Write me at info (at) thecareerpioneer.com or share your story with us in the comments section below.